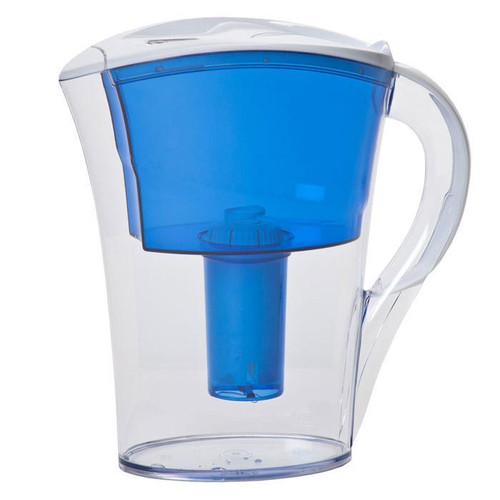 We’re happy to show off the range of non-electric ionisers from AlkaViva which represent the very best quality on the market. With a desirable negative ORP and a pH level of 8.5-9.5, the AlkaViva non-electric ionisers boast their market-leading UltraWater system for filtration. Enjoy all of the advantages of purified alkaline water, now for less than £100.

Following three years of careful research and extensive development, those clever people at AlkaViva have produced the stunning UltraWater design. A world first, it’s now possible to have a filter that completely removes the greatest number of contaminants where compared to every other filter system used domestically, but simultaneously retains the desirable minerals and alkaline pH level.

Fluoride in the water is a concern for many people but with UltraWater there are no worries as it removes this element to levels which are non-detectable. In addition to getting rid of the fluoride it also removed a number of other undesirable elements such as pesticides, pathogens, hormones, pharmaceuticals, lead, mercury, arsenic, chlorine, chromium 6, volatile organic compounds, chloramine, agricultural run-off, detergents and industrial waste (to name just some).

UltraWater outperforms every other passive filtrations system on the domestic market and even better, is a small compact design. With one small jug-sized device you’ll have access to cutting-edge technology which not just filters water, but provides real peace of mind.

Demonstration of the Product

Independent testing from an EPA certified laboratory in the US has confirmed that 99.9% of all contaminants from tap water are removed with the UltraWater system. This allows your family to enjoy the reassurance of drinking water which is almost completely free of nasties such as chlorine, pesticides, heavy metals, pharmaceuticals and other unwanted contaminants!

There’s no other non-electric ionising product which compares with the performance of the AlkaViva UltraWater pHD range of products. The water produced through this filtration system is not just delicious as its’ alkaline; it’s also chock-full of antioxidant power too! The UltraWater filtration system is patent pending with the ability to remove up to 99.9% of known contaminants in tap water including:

When you drink from the UltraWater filtration system you have the reassurance of knowing that it’s a US manufactured technology. The technology used for UltraWater is proprietary with the manufacture taking place in the heart of Nevada, in Reno. Only materials which have been proven to be contaminant free and safe are used in the process.

The UltraWater filtration system may sound great but it’s no advertising gimmick; it really is the best and that’s proven by this comparison with the older style carbon filters.

The UltraWater guarantees that all of the following will be removed:

In addition, it will also enhance some of the healthy properties.

Comparing other filter brands, the Velara Velaqua will also enhance healthy properties but will only remove chlorine; all of the other contaminants will remain. The Multipure performs a bit better but still leaves pharmaceuticals, fluoride, byproducts of disinfection and some heavy metals in the water, plus it doesn’t enhance the healthy properties.

In tests when compared to other filter brands, there really is no comparison with UltraWater.

For alkaline water which is an antioxidant, contaminant free, energised and delicious too, the cost is ridiculously low, just a few pennies for every gallon.

Using the UltraWater filtration system you could enjoy:

You may be wondering why you would need the UltraWater system if you already use a filter but the truth is that many harmful substances such as heavy metals (including copper, arsenic and lead) will not be removed and neither will pharmaceuticals, industrial chemicals or fluoride.