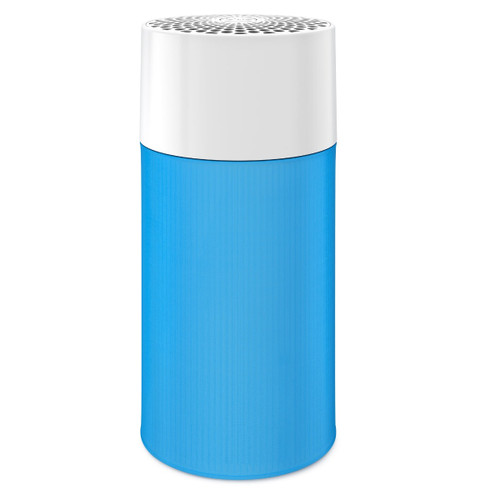 Designed to be compact while still providing top air filtration performance, the Blueair Blue Pure 411 is an ideal purification solution for rooms as large as 15 m². It’s Combination filter technology is highly effective against a wide array of allergens and contaminants and it’s 360° intake area ensures a wide spanning impact.

The Combination filter used in the Blue Pure 411 marks the current peak for air filtration technology. Built to combine both HEPA and Activated Carbon filtration it is effective against many different contaminants and allergens. This includes pollen, dust, PM 2.5, pet dander, smoke, mould, bacteria and viruses.

Its 99.7% effectiveness against allergens allows it to make a notable difference very quickly and it has an expected life of 6 months or around 4,380 hours of use. As a result, the Combination filter doesn’t need replacing too frequently and it can be easily to disposed of as it is widely recycled.

To match the top purification quality offered by the 411, Blueair has worked hard to make it very efficient when in operation. As a result, at its highest level, it only uses 10 watts of power and at its lowest level, it works at a mere 1.5 watts.

That efficiency also allows the Blue Pure 411 to remain very quiet when in operation. When at its lowest level it can even operate at 17 dB, which is about the same as standard breathing in terms of volume. Therefore, this purifier is a great nighttime companion that is almost undetectable.

The Combination filter used in the Blue Pure 411 also implements a gradient structure of ultrasonically bonded fibres, which allows for maximum airflow to be maintained while allergens are removed. The complex nature of this structure also prevents allergens from escaping back into the surrounding environment once they are captured.

Beyond its impressive purification ability, the Blue Pure 411 is also very easy to control. It’s streamlined interface consists of just one button on the top of the unit. This single button is used to cycle between the 3 speed settings and even indicates when the filter cartridge should be removed and replaced.

Moving beyond its technical elements, the Blue Pure 411 also makes an impact with its bold and colourful design. Built to be compact, it has a minimal form factor, which has been blended with clean and modern styling ideas to great success. Its colour can also be modified through optional pre-filter accessories.